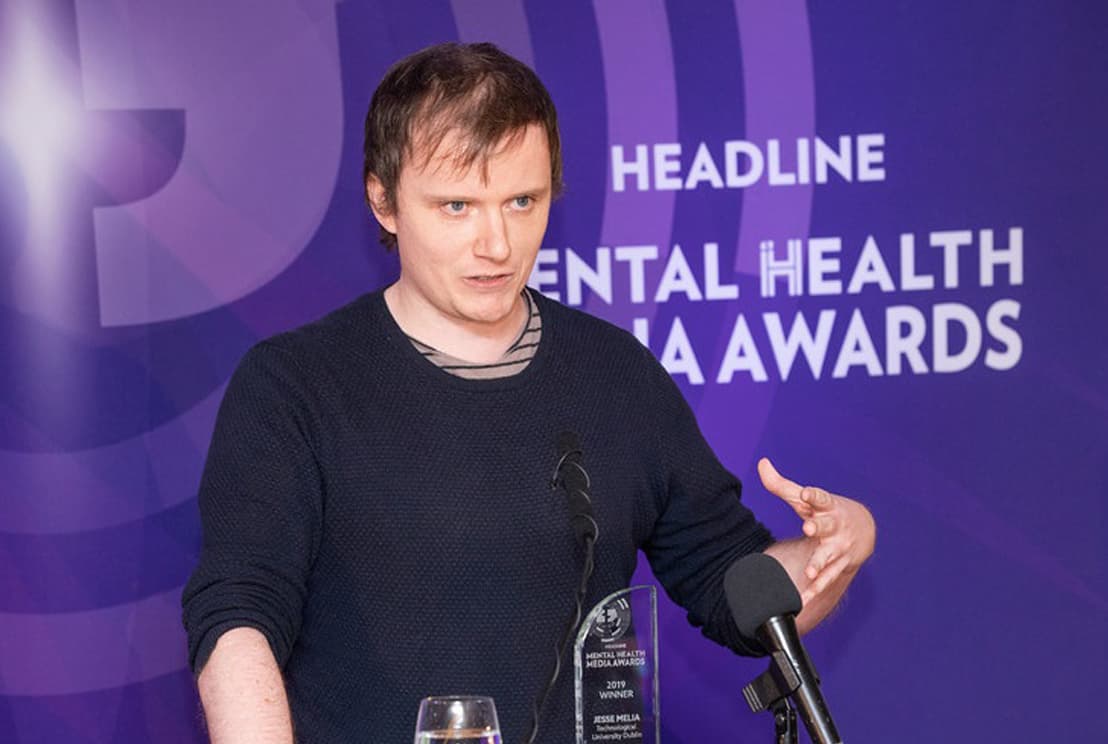 The idea to enter the Headline awards was basically a bolt out of the blue. I had finished my studies and started in a new job around September 2019. My girlfriend Jenny heard about the Headline award and sent me a link. My final year project had won a Student Media Award back in May, and was about a mental health issue – the dual diagnosis of addiction and mental health – so we thought, why not throw it in and see what happens?

In all honesty, it was kind of a punt. I submitted it, not knowing if it would pass muster for a national award, so when I got the email saying I was going to be nominated I was both shocked and delighted.

That said, I think student writers and producers are ideally placed to cover societal issues like mental health. Purely because they are new voices. Student life is a very heightened period, and mental health issues can manifest for students in a unique and intense way. Empowering these new voices to tell their story – or giving them the tools to tell other people’s stories – is vital. Students have fresh minds, whatever the age, and they offer a fresh perspective on issues that have long been gestating in the public arena.

A fresh perspective, vividly told, is vital in mental health reporting. This might be a generalisation, but sometimes, the public can be apathetic to mental health issues that don’t directly affect them. In the swirl of the modern news cycle, with EVERYTHING that has been going on in recent years, it’s a tragic reality that mental health can get minimised – lost in the shuffle. Student voices offer a fresh take – their storytelling can grab the viewer, it can foster understanding, and critically, ideally, can generate empathy.

The event in December was a great treat. Going to a nice ceremony filled with recognisable media faces had me awestruck. My head darted to and fro like an inquisitive gazelle alighting in a new forest for the first time – full of wonder. I enjoyed chatting to the other journalists around the table – I don’t think I was gregarious enough to call it networking, but I gave it a good shot.

The highlight of the ceremony, as I’m sure many who attended will attest, were some of the speeches. They covered tough issues, but ultimately there was a real message of hope and understanding, which definitely resonated with the audience. It reinforced my sense of the importance and value of how journalism and writing can light the dark corners of people’s minds.

Winning was an incredible rush too. When journal.ie Managing Editor, Susan Daly, was announcing the winner, and detailing why it won, I slowly realised that she was talking about my documentary – I still remember the rush of excitement that surged through me. It was a great personal achievement for me.

The placement in thejournal.ie was both rewarding and eye opening.

In my time as a student, I got a good sense of the practicalities of journalistic work. But being in a live news room was a whole new experience. I saw firsthand the effort, application and talent that each journalist puts in on a daily basis. Journalism is a real skill – the knowledge base, intelligence and confidence needed are impressive and intimidating.

In my short time there, I was greatly helped by the team. Deputy Editor Christine Bohan, News Editor Daragh Brophy and Assistant News Editor Laura Byrne all gave me great support and guidance throughout the two weeks.

Daragh said that the best use of my time was going out and reporting on stories on the ground. I chatted to Irish Will and Kate superfans (a curious but welcoming bunch) outside the garden of remembrance, and saw the two royals in the flesh. I attended the press conference for the National Transport Authority’s rollout for the next phase of BusConnects – I even asked a few questions which was a thrill. And of course, I was there as Covid-19 escalated rapidly. I attended a HSE update, and went to Leinster House to see Leo Varadkar announce the 3 billion Euro fund to help deal with the crisis.

All in all, it was a memorable two weeks. It was a thrill to be plugged in to the live news cycle during a time of such wild upheaval, and the experience will stay with me forever.