The loss of any person to suicide is a tragedy, celebrity or otherwise.

When UK television presenter Caroline Flack died earlier this year, her death, and the time leading up to it, was examined in minute detail. Much like the aftermath of many suicides, questions were asked about how this could have happened and whether anything could have been done to prevent it. The major difference here is that millions of people were following the story. When a critical incident like this happens, stories move quickly. Journalists and producers rely on the skills they have, the lessons hard learned and the resources at their disposal to the tell the story as well as they can. The last thing a journalist wants to consider is if their story could potentially do more damage or harm that audience. In the week following Flack’s death, we monitored over 500 articles related to her suicide, along with countless broadcasts. Although we have completed a preliminary analysis of the data collected (see below), it is likely that there is more learning to be gained from it in the future.

The media are an incredibly important part of raising awareness about suicide and its prevention. How mental health is represented is also key to many people’s recovery. Below you’ll find how Headline worked in the first three months of this year to better facilitate that learning. 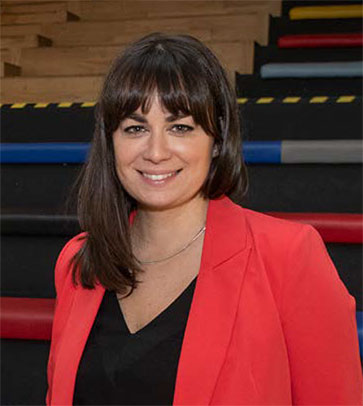 Two events contributed to significant changes in our first quarter media monitoring analysis when compared with the same period in 2019. Firstly, Headline contracted a new media monitoring partner in early 2020 which allowed us to access content from a major tabloid newspaper that was previously unmonitored. As a result of this change, we now have more accurate and complete data, giving us a more comprehensive overview of the Irish media landscape. Secondly, the death by suicide of Caroline Flack was followed by a large amount of related media coverage appearing in a short space of time. A summary of that analysis is below.

number of articles monitored between January and March 2020

number of articles related to suicide, self-harm and stigmatising language analysed by Headline

2 publications were responsible for 45% of non-compliant articles in Q1. The remaining 55% distributed between 62 other publications.

Of the 514 articles which didn’t comply with guidelines, only 45% originated in Ireland, while 51% came from the UK and 4% from the US. 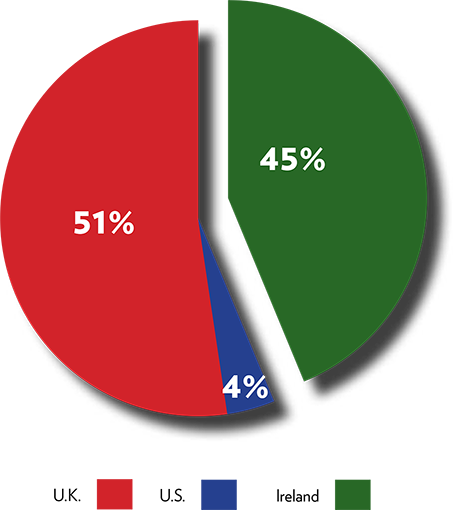 11% of articles about suicide did not contain helplines – a significant increase in 2019 figures. An exceptionally low number of articles gave explicit reasons for a suicide, demonstrating the vast majority of journalists are acutely aware of the impact their reporting can have on audiences. 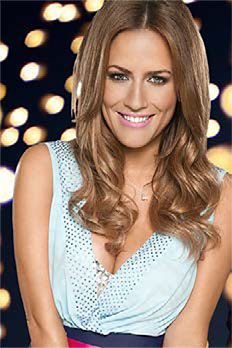 Of articles related to UK presenter Caroline Flack and her death by suicide, 46% did not comply with suicide reporting guidelines. See a detailed analysis of reporting on Caroline Flack’s death in the full report. 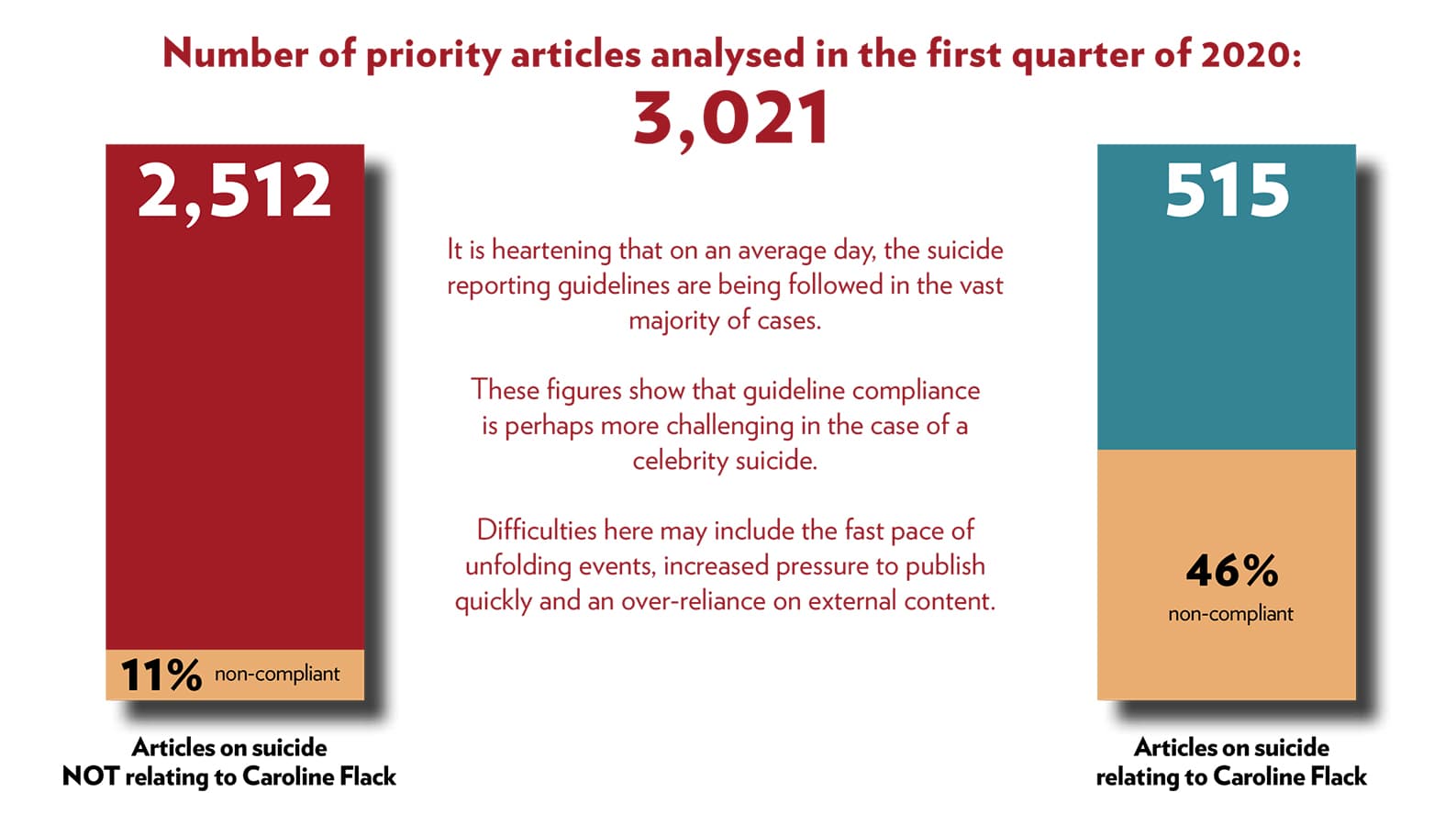 40% of articles containing stigmatising words were tied to violent behaviour.

In two weeks, 49 programmes across radio and television discussed suicide or mental health. 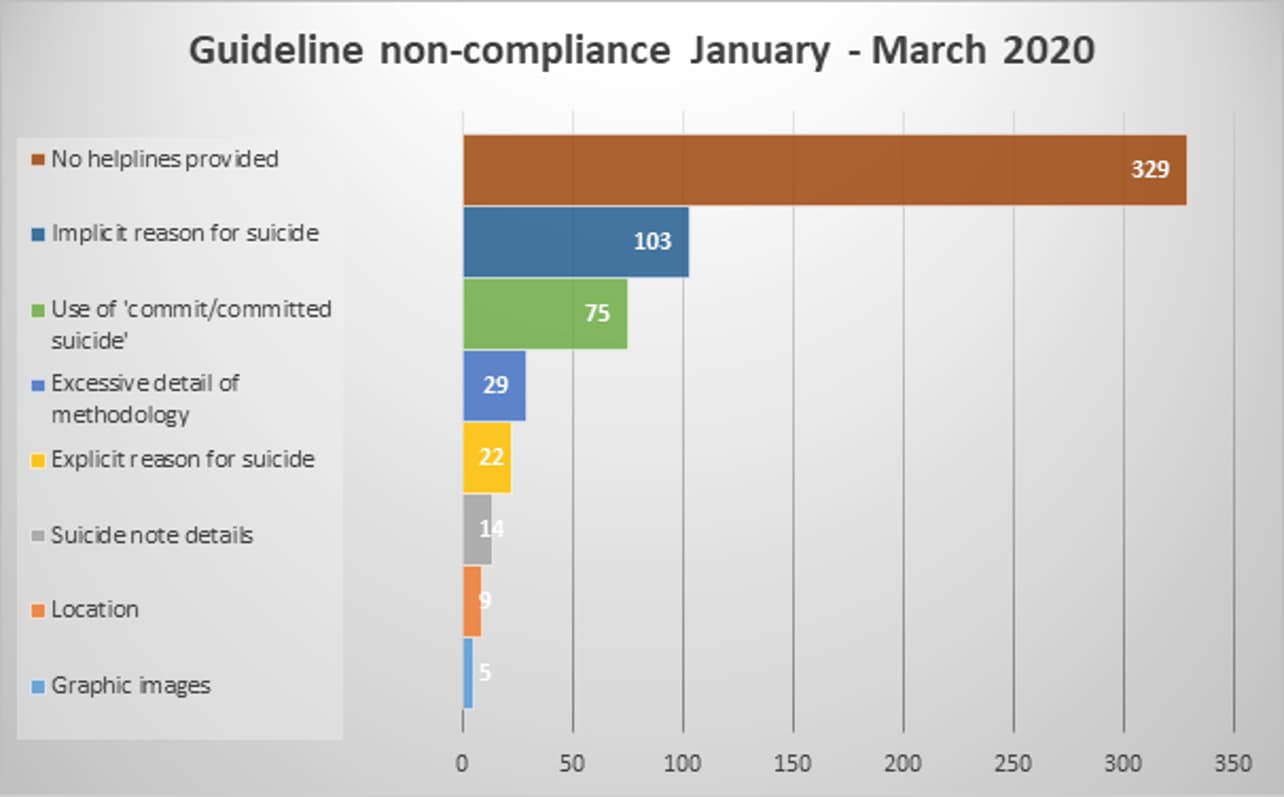 While our Education Officer is on maternity leave, Headline’s Programme Lead delivered all our student workshops between January and March 2020. We aim to deliver to most journalism courses in the country but Covid-19 restrictions have temporarily put these workshops on hold. That being said, by late February 2020, we had delivered our free 2.5 hour workshop to almost 70 journalism students across Dublin, Limerick and Galway.

(See the full report for details on our student surveys)

All participants studied journalism or had journalism as one component of their training. 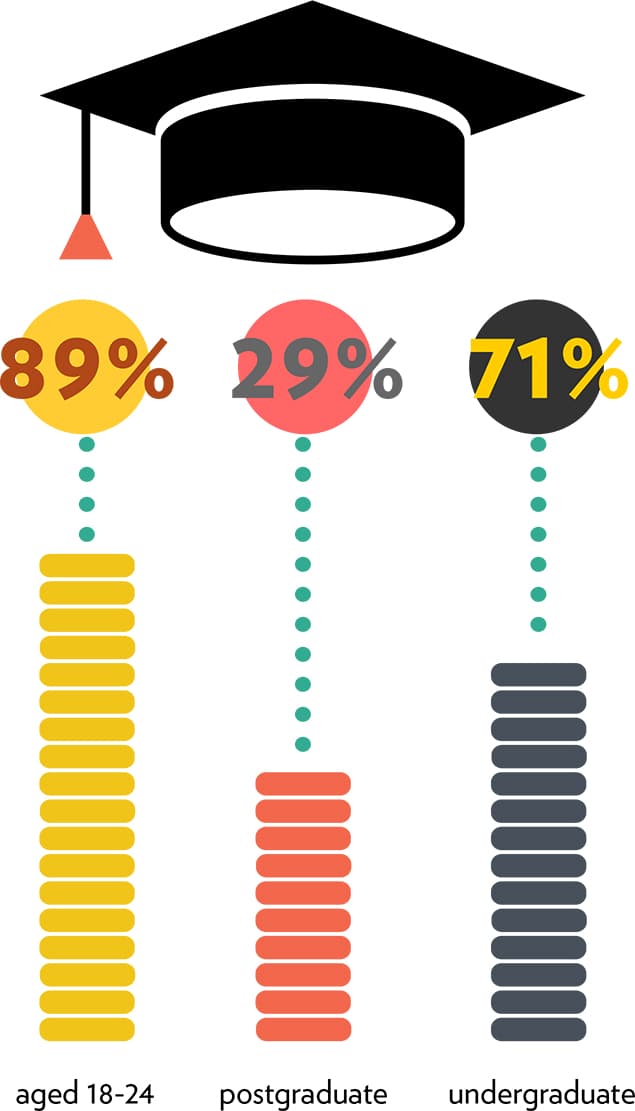 
While 97% had no previous training or guidance in how to report on suicide responsibly, almost a quarter of students said they had already produced stories related to suicide and/or mental illness before taking part in the workshop.

100% of participants said they would seek guidance from Headline if they were reporting on suicide or mental health in the future.

…of the suicide reporting guidelines rose by 167%

Students asked lots of questions about…
the coroners’ court,

misconceptions about schizophrenia and other mental illnesses,
PTSD among journalists,


I have always included Headline in the seminar series because I want to ensure that our students understand the responsibility that they have when reporting on mental health issues, and suicide in particular, when they start working as journalists…It was the best presentation that Headline has given students to date.
Lecturer and Course Co-ordinator

A new Education section has been added to our site. We get asked a lot of questions about our student workshops so we’ve put together a handy FAQ page and also a full breakdown of what course coordinators can expect. We also give guidance on some safe guarding measures educators need to put in place before we arrive on site.

In 2018, Headline commissioned our Challenges research. This was an exploration of the obstacles and difficulties faced by journalists when covering topics related to suicide, self-harm and mental illness. One of the starkest findings delivered by lead investigator Dr. Anne O’Brien was the reluctance or inability to cover stories related to particular mental illnesses. 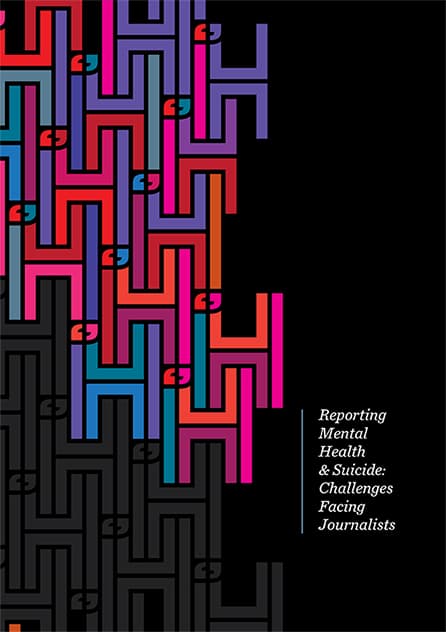 One producer who had successfully made a documentary about mental illness summarized the challenge in terms of the stigma that participants face. ‘It’s hard to cover because there’s so much fear out there. The stigma is massive, that’s what everybody who didn’t want to talk, talked about.

Following the receipt of one-off funding, Headline has begun building a best practice guide for media wishing to greater understand and work with people living with severe mental illnesses.

If you blur people out it dehumanises them and puts a barrier between the audience and the story.
TV Producer interviewed for Reporting Mental Health & Suicide: Challenges Facing Journalists, 2018

The Media Trust Initiative is being led by Aoife Boland from Quality Matters and co-ordinated by Elaine Haskins of Headline. Read more about the development of the best practice resource in the full report. We anticipate the entire process will be complete by Q3 2020. 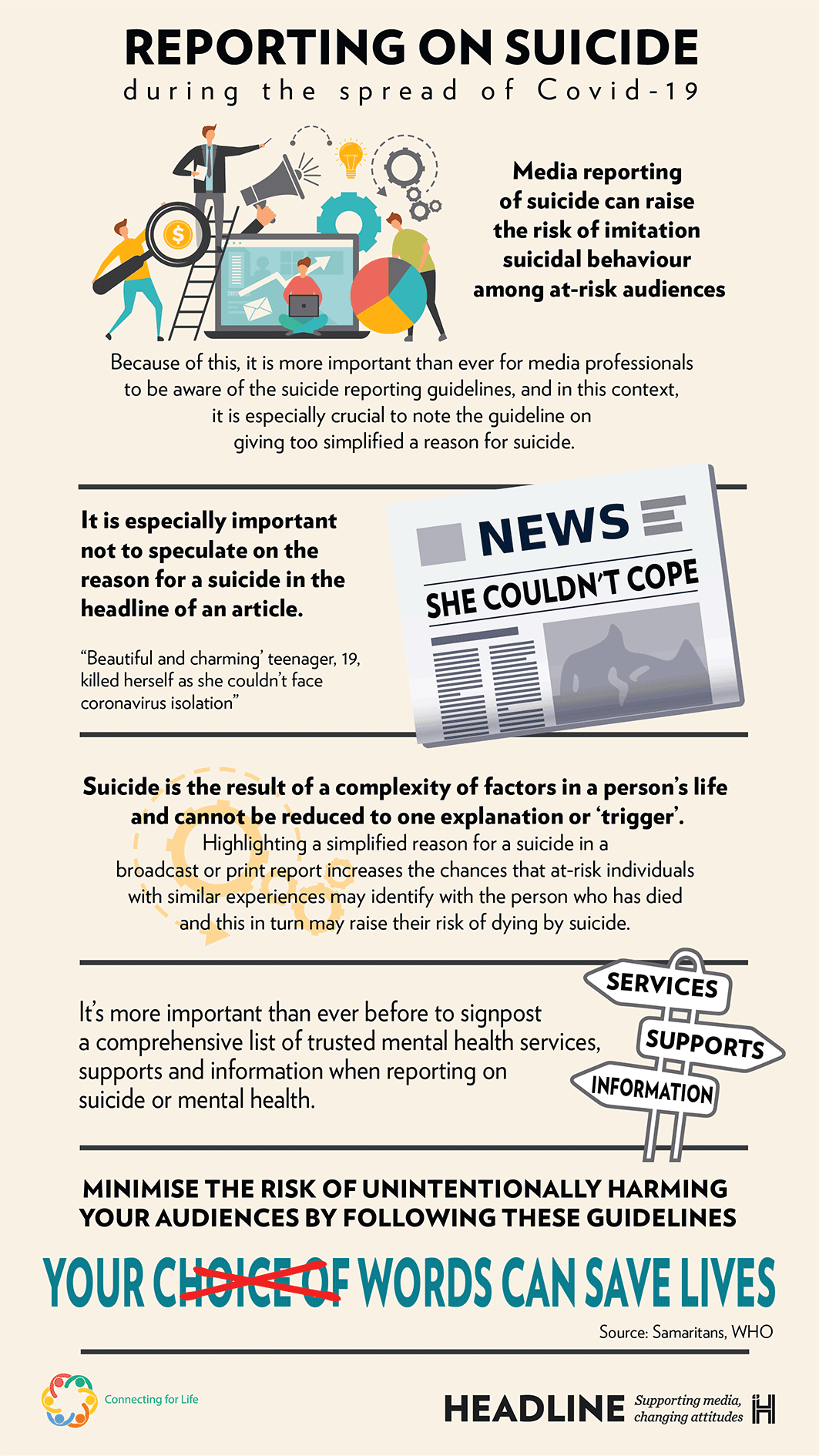 At the end of March, we released an advisory note about reporting on suicide, self-harm and mental ill health during the spread of Covid-19 which can be found here.

Towards the end of Q1, around the time Taoiseach Leo Varadkar announced new curtailments on businesses, schools and movement, Headline created a new monitoring alert which would notify us of any content or stories directly linking a suicide to Covid-19. This was a precautionary measure in case any instance of irresponsible reporting might create its own contagion effect. The results of that monitoring will be available in Q2’s review.

Read more about our planned and postponed supports to media workers in the full report.

Our Headline Education and Policy Officer, Sinéad Keating is currently on maternity leave. We are working on filling her position in the interim. However, given our unusual circumstances, any new team member we recruit will most likely have a slightly different work focus.

Plans for next quarter

Our Media Trust Initiative research will be getting underway, with preliminary work, a literature review and various interviews all happening over the next few months.

Work will be done to create a guidance booklet for journalists which aims to help them to navigate discussing the circumstances of a suicide without simplifying the reasons for it.

If you would like to find out more about Headline, get in touch by emailing info@headline.ie or explore this Headline.ie