New research released today by Headline shows there is a critical absence of reporting and programming on mental illness in Ireland. The report highlighted a number of key challenges for media workers operating in this sphere, including their lack of understanding of severe mental illness like Schizophrenia, Bipolar Disorder and others. Also highlighted in the report was the shortage of participants with lived experience willing to participate in programming or engage with experts. This is echoed in media workers observations that mental health advocates and organisations are increasingly paternalistic in their approach to working with the media.

Headline commissioned Dr. Anne O’Brien from Maynooth University to examine the attitudes and workflows of media workers in Ireland, to better understand what are the obstacles to responsible and continued coverage of mental health and suicide. Headline Programme Lead Áine O’Meara said, “This research marks a critical step towards better collaboration with the Irish media. We can’t hope to influence or change the behaviour of an entire industry without first understanding the space and constraints in which they operate. The potential for positive change in attitudes towards those affected by suicide and mental ill health cannot be underestimated, and Irish audiences stand to beneﬁt most from that.”

Dr. O’Brien undertook Reporting Mental Health and Suicide: Challenges Facing Journalists “because I know that the media can profoundly shape our thinking and understanding of mental health and suicide. I admire the courage journalists have in tackling difficult stories, of brining underrepresented people and issues into the light of public discussion. Even more, I really admire the bravery and honesty of the extraordinary people who are willing to tell their stories and share their experiences of mental health issues, illness and suicide with the public, so that we can learn. I hope this research contributes in a small way to helping both journalists and contributors continue to tell their stories in ways that are  incredibly powerful but also safe for all.” 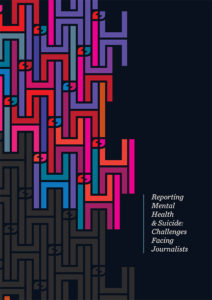 You can download the full version of the research here.