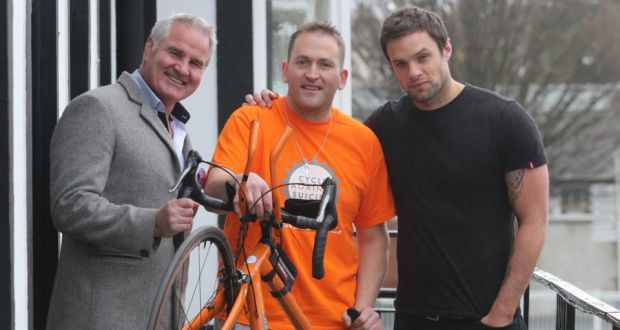 More than 4,000 students showed up to talk mental health awareness with some of Ireland’s best known sport stars and personalities in the RDS today.

Singer and The Voice of Ireland judge Niall Breslin aka Bressie, Rugby analyst and former player Brent Pope and former Cork hurler Conor Cusack were among the stars that shared their heartfelt stories at the first Student Leaders’ Congress.

The core message of the day, organised by Cycle Against Suicide and ReachOut.com, was “it’s ok not to feel ok and it’s absolutely ok to ask for help”.

Cycle Against Suicide founder Jim Breen said he was overwhelmed with the turn out of 130 schools from 29 counties for the event.

“There is an appetite for change. It’s about changing the mindset and getting rid of the stigma attached to mental health issues,” he said.

Mr Breen founded the group after he visited a suicide awareness group in Dublin as part of a the RTÉ documentary, The Secret Millionaire, in 2012.

He said 7500 people had signed up for the cycle in April, a dramatic increase from 2500 last year.

Mr Cusack said changing attitudes towards depression and suicide in Ireland would not happen overnight.“But it is changing and gaining momentum,” he said.

“Services have definitely improved but there’s a need for more.It’s a terrible added burden to be worried about what people think. I nearly lost my life. I’m glad I didn’t.”

Mr Cusack said mental health issues were a hidden pain and showed no bias.“I don’t have the words to describe the horror and torture you go through. It doesn’t care who you are or where you work,” he said.

Mr Cusack, who turns 35 tomorrow, said he was 15-years-old when he got his first panic attack.

“Depression doesn’t have to be something that defines you.It’s an act of courage and strength, not weakness, to speak out and get help.”

Bressie said it was huge progress seeing so many students gathered for the event.

The singer, who broke his own arm at 15 years old in a cry for help for his panic attacks, said he had wasted too much energy trying to hide it.“You feel massively alone. Speaking out, I can’t describe how much it helped me.”

Bressie said there had been a noticeable change in speaking about mental health in Ireland in the last year.

“We need to get rid of that stigmas. The most interesting people I’ve met in life are people who’ve themselves struggled,” he said.

Rugby television commentator Brent Pope, who has suffered severe anxiety and panic attacks since he was a teenager, said he grew up thinking it made him a “weak man” to speak about your problems. Mr Pope said he was happy to see so many young people hearing the message it’s ok to speak out. “Attitudes are changing thank god.But there’s a lot of work to do,” he said.