Headline, Ireland’s national media monitoring programme for mental health and suicide, was privileged to take part in the symposium entitled: “The challenges in journalism practice and treatment of mental health related stories in Irish media” organised by University Limerick on 20 April 2017.
The panel discussion primarily focused on the media coverage of murder suicide in the Republic of Ireland. Researchers, academics, news journalists, editors and students came together to share information about the reporting trends of murder suicide cases over the last ten years and the impact that stories relating to mental health and suicide have on the public. The discussion had a particular focus on the implementation of media guidelines to ensure responsible reporting of mental health and suicide issues.
After the panel discussion, those in attendance heard from Cork mother Una Butler who lost her two daughters, Zoe (6) and Ella (2), and her husband, John (43), in a murder-suicide six years ago. Ms Butler called for accurate and sensitive reporting of murder suicide cases and stated.
“The media have and are in a powerful position on how they report anything in general, but in particular with murder suicide accurate reporting is essential. People and society have a right to know how often these cases are happening”
She continued “I can understand that people just cannot comprehend or don’t want to read about it and that it why it is so important that when murder suicide cases are being reported on that it should be reported accurately and in a sensitive manner- no sensationalising, no glamorising of the events.”
Claire Sheeran, from Headline, the national media monitoring programme for mental health and suicide welcomed the debate. “This event was a great opportunity to speak with academics and media professionals alike about the work that Headline has undertaken over the last ten years.
She continued “Whilst mental health and suicide are newsworthy subjects it is important to understand that responsible and accurate coverage of mental health encourages help seeking behaviour and helps to remove the stigmas and myths that surround these issues. 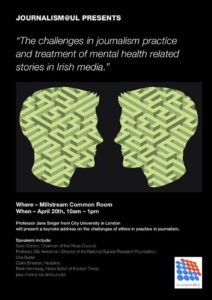