10 Years on: A Discussion of Mental Health and Suicide in the Media – Past, Present and Future 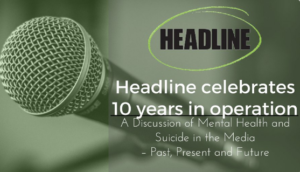 Headline, the national media monitoring programme for mental health and suicide, celebrates 10 years in operation:
A Discussion of Mental Health and Suicide in the Media –
Past, Present and Future
What: Headline celebrates 10 years in operation
When: 11am – 1pm, Wednesday 12th July 2017
Where: The Hilton, Kilmainham, Dublin
Headline, Ireland’s national media monitoring programme for mental health and suicide, will hold a symposium featuring experts in the field of mental health and suicide prevention to commemorate its 10 years in operation. The event will be held at the Hilton Kilmainham Hotel in Dublin from 11am to 1pm on Wednesday 12th July 2017. The conversation will focus on media coverage of mental health and suicide related issues over the last 10 years with a vision of how Headline can support and engage with media professionals in the future.
The event will be hosted by Director of Headline, John Saunders, and speakers on the day will include Gerry Raleigh, Director of the National Office of Suicide Prevention (NOSP), Professor Ella Arensman, Scientific Director of the National Suicide Research Foundation and President of the International Association of Suicide Prevention, and Brian Farrell, Dublin District Coroner emeritus. See Change Ambassador, blogger and TV3’s the Elaine Show panellist, Jen Ronan, will give her perspective about the effects of media reporting as someone who experiences mental health difficulties.
Talking ahead of the event, Director of Headline John Saunders said, “Research has shown that people often form their attitudes about mental health difficulties and suicidal behaviour through television programmes, radio programmes, news reports and other forms of media. It is vital that we work with media professionals to increase public understanding”.
Mr Saunders, will present Headline’s 2017 Media Awards in recognition of positive media coverage of mental health and suicide on the day. The Awards ceremony will include the Overall Media award for positive coverage of mental health and suicide, the Regional Media award in recognition of the best regional newspaper at covering mental health and suicide, the Voice Media Award for coverage given to personal experience of mental health and the Headline Student Competition Award judged by Irish Times journalist Carl O’Brien.
Speaking about the symposium Director of the NOSP, Gerry Raleigh said, “There is clear evidence to show the link between graphic media reporting of suicide and imitative (copycat) behaviour. This is why promoting responsible media reporting and responding urgently to address content which discusses methods or represents suicide as a meaningful act is a key element of our national suicide prevention strategy, Connecting for Life. This is not about media censorship, but working in partnership with the media to help support people in distress.”
Speaking about Headline’s ten years in operation, Professor Ella Arensman said, “Over the last ten years, Headline has played a key role in increasing understanding of best practice in terms of media reporting on suicide among media stakeholders, whilst also taking into account the international evidence. Headline has made an important contribution to suicide prevention in Ireland by widely disseminating the media guidelines and by systematically monitoring the quality of media reporting”.

Commenting on media coverage of these issues in Ireland, See Change ambassador Jen Ronan added, “As someone who blogs regularly and sometimes fairly brutally about the realities of living with depression and anxiety, I’ve found a whole new receptivity online towards mental health that has steadfastly made its way into mainstream media over the last few years”.

Please RSVP on EVENTBRITE to join the audience. https://www.eventbrite.co.uk/e/headline-celebrates-10-years-in-operation-a-discussion-of-mental-health-and-suicide-in-the-media-tickets-35206103403
-ENDS-
FOR FURTHER INFORMATION CONTACT:
Communications Officer Kate Morgan 086 0142 105 / Email: info@headline.ie / www.headline.ie
About Headline
Headline aims to highlight mental health issues and address the stigma attached to emotional distress, suicidal behaviour and mental illness through the promotion of responsible media coverage. Headline operates under the remit of the current national suicide prevention strategy, Connecting for Life, as set out by the National Office for Suicide Prevention.